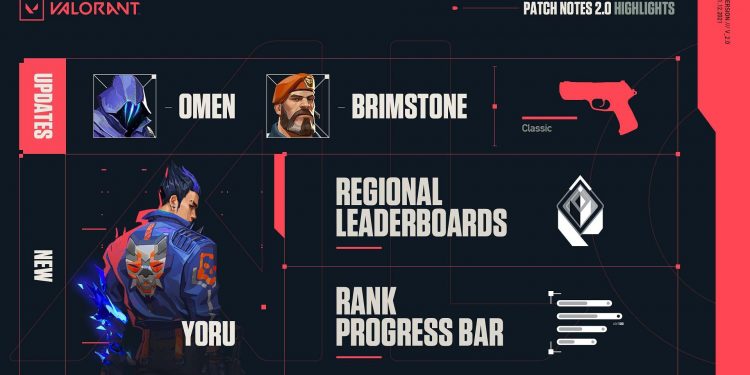 Valorant Patch 2.0, 2021’s first Valorant update has finally released, bringing with it a new agent, a fleet of buffs and nerfs and an easier to understand competitive system.

The new patch also introduces players to Valorant’s Patch nomenclature, as Episode 1 saw the 1.0 patches while Episode 2 will see the 2.0 patches.

This patch aims at tweaking controller agents and Omen is set to receive a nerf to his flash and smoke ability. On the other hand, our very own captain- Brimstone will be given a buff to all his abilities except his ultimate. The Classic’s Alt-Fire- infamous for popping heads, will be nerfed.

With a new season comes a new Agent: Yoru: The Japanese Duelist. Stealth and deception is his forte, to navigate around enemy teams and set up unexpected peeking angles. You can check out Yoru’s abilities here.

With Patch 2.0 the devs differentiate the strengths of Valorant’s Controllers class of Agents- Omen and Brimstone. These two have been in competition since the beta and usually, only one of them is considered viable. By giving each more clear strengths, the devs hope to make both Agents strong in different situations.

The Classic is proving to be a master-of-none choice in pistol rounds, with the exception of jump right-clicks and spamming right-clicks. The spread changes aim to pull the effective range of the jump bursts and the firing error/recovery aim to put some more finesse into how effective you can be while spamming it out. Input queue will help shots between bursts come out more smoothly.

We will be doing a separate article to explain the following changes to the competitive system:

A patch is always incomplete without bug fixes. This patch will fix most of the bugs exploits players have been experiencing with Omen.

We just hope that there are no major bug outbreaks that may force Riot to roll back the patch like in previous updates. A lot of changes have been made to the game as we jump into Episode 2 but the ‘Valorant’ experience for which the game is most loved for still remains the same.