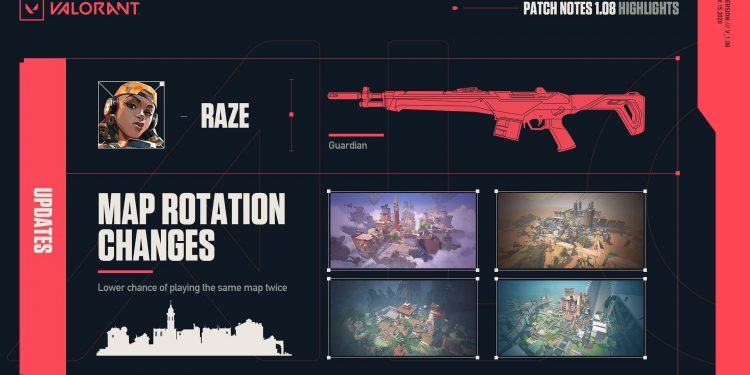 In the last Valorant Patch, we saw some major changes to many agents like Sage, Breach and Viper- and weapons like the Vandal and all the Shotguns. These changes have settled in pretty well and the meta has become pretty stable.

The Valorant 1.08 patch is a little light and does not have any major agent changes except for Raze’s Blast Pack. The new patch’s main focus is to ensure that players have a lower chance of getting the same map twice. The patch also brings in a buff to the Guardian.

In order to increase counterplay against Raze’s Blast pack the change should help make it very clear when Blast Pack’s damage poses a threat while maintaining the utility aspects of the Blast Pack that players have begun to master. The following are the changes made:

In order to make Guardian a good choice as a weapon at the new price and serve as a competitive purchase in certain economic situations and map situations. The following are the changes made: