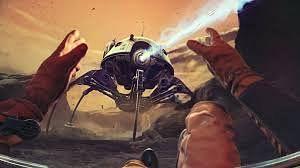 ‘The Invincible’ is an upcoming sci-fi thriller game. Former developers of Cyberpunk 2077, Witcher 3 and Dying Light have formed a new studio to announce their new venture.

Starward Industries took to twitter to announce their first game. The Invincible is a retro-futuristic, atompunk style game.

Find your crew on ‘Regis III’

The Invincible is based on a novel of the same name by Stanislaw Lem. The game looks to recreate the fictional environment as of the book. Set in a retro-future timeline, you embark on a mission in your ship named ‘The Invincible’ and land on planet Regis III to find your missing crew who came on the planet from another spaceship. It soon becomes clear that they are not alone and many mysteries are unlocked as the game progresses,

Starward Industries CEO Marek Markuszewski, in his talk with TheGamer explains the idea behind giving life to Lem’s novel. “Lem centers on dynamics of humanity and societies in the future,” Markuszewski explains. “These visions, stretching hundreds of years into the future, are deeply rooted in science. [And] as time has shown, his logic and conclusions came to life.” The reason for choosing this novel was that the prose is visually appealing. It’s like a ready-made movie script. “It’s both epic and believable,” he explains.

The fate of the crew is in your hands

Coming from the former developers of Cyberpunk 2077, Witcher 3 and Dying light, players will expect a high standard from this game.

The Invincible is set to release in the second half of 2021 on PC and next generation of consoles.