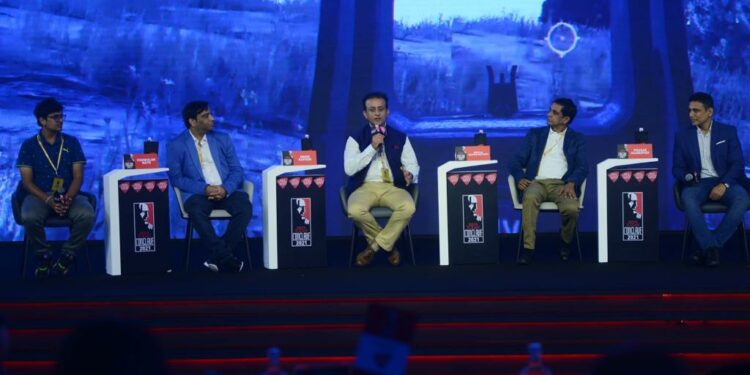 There has been a surge of esports tournaments in India, especially for games like BGMI, Valorant, and Free Fire. Recently, the annual India Today Group Conclave was hosted featuring a dedicated session on the esports segment titled- King Kong: The Multi-Million Dollar World of Gaming, And why India is still playing catch-up.

Among the panelists was well-known esports athlete Naman ‘Mortal’ Mathur who emphasized on the need to organize more esports tournaments in the country. “We need to have more tournaments and more games to make esports a viable career option in India,” he said. “Esports Being a part of the Asian Games adds a lot of legitimacy to esports, not just the games which are participating but for the entire industry, and certainly participating and competing for your country is a great feeling. Even for Asian Games this is needed how do you attract a young crowd to watch your games so yes for us we need Asian Games and I believe Asian Games needs us as well as much” Aneesh Aravind, Head of Publishing, India Krafton said.

When asked about what was the process like before the launch of BGMI, he said “When Krafton decided to do publishing in India, we looked at what the market is, where it is going to grow, and we also looked at the player base that was here. So, we said that we are going to launch BGMI and that took a bit of time and players went really clamoring. When we released it, it was phenomenal. Within a week, we were able to get 40 million downloads and 16 million DAU. More than the numbers, what we saw was the gamers’ passion. So, we looked at the passion and that was exactly what we were looking to build our product towards” he added. Anish Kapoor, CEO, Infinix Mobiles India talked about the new innovations in the mobile gaming space and how companies are coming up with better gameplay experiences. “There is a whole lot of bunch happening in the RND space. We have introduced a Darlink technology which is very specific to us. Here we are giving people the opportunity to experience gaming from a budget segment. When we say budget segment Rs 8,000 to 20,000 is where we want to put our focus and energies on. We are working to take gaming to tier 2 tier 3 cities tier 4 kind of audience and get younger people involved and it can be a career option for them,” he said. Mortal was among one of the most popular PUBG Mobile players and has had tremendous in the game. “The transition has always been upwards, the experience has been great, I was doing B Com and wanted to be a company secretary while doing LLB. I was also uploading videos on YouTube just for fun like how people go to play outdoor games at 5, I would play on my mobile for 3 or 4 hours a day and one of those videos got viral and people started recognizing Mortal. PUBG made me viral. Currently, it is BGMI,” he said.

Mortal talks about organizing more esports tournaments in India. “We need to have more games, tournaments, and investments in India, I feel then esports will grow at a very large scale and can be a viable career option in the future. He also advised new gamers to focus on one among esports and Content creation. It requires a lot of mental pressure you have to seat and play for a very long time and then at night you have to stream so only one will be better”. Vishwalok Nath, Business Head, Gaming & Esports, India Today Group said, “As India Today Group, we started India Today gaming in October 2019. That was our first tournament. In fact, we launched free fire in the country. We were very skeptical.”

“We initially thought that only 10,000, 20000 people are going to participate. But to our surprise we got 1,25,000 registrations and 12 million video views graduating from October 2019 to now, we created ESPL, which is the first-ever franchise tournament in gaming. It got 1 million registrations and 100 million video views. 10x jump in one and a half years. ESPL was one of its kind” he added. “There are sections of Population who are not into traditional sports. We have a 2 crore population of 11, 12, 13 years old who are not into traditional sports. For now, the sports industry has been growing on an Individual level and I think now the industry is going to explode and having seen the traditional sport like PV Sindhu takes 11 or 12 years to become a world champion and win a medal but this is the sport I think we will be producing global champions probably in the shortest period of time” said Prasad Mangipudi, Managing Director, Sportzlive, Co-Owner Esports Team Hyderabad Hydras in ESPL.

Other than organizing more esports tournaments in India and getting more investments, the session also highlighted the possibilities and ambiguities that Indian esports needs to work on if it wants to become a global esports powerhouse. We know esports tournaments in India feature massive prize pools and attract large audience, but with the right efforts, the industry can grow even further.