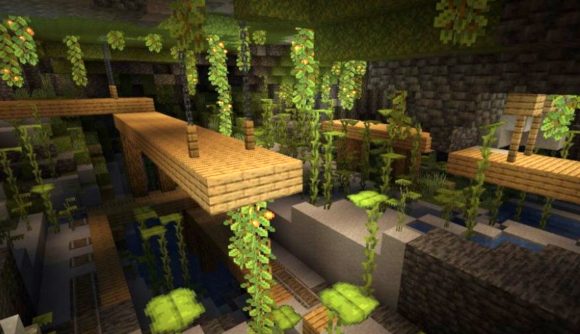 Minecraft developers have rolled out a new snapshot ahead of the Caves and Cliffs update. Snapshot 21W10A went live featuring the lush caves biome, an overgrown underground area that players can explore. The devs have also changed the rendering engine from function rendering to shader-based rendering using OpenGL 3.2 profile.

Minecraft is a survival game for PC which is developed and published by Mojang. It is available in single-player and multiplayer modes and is one of the most popular sandbox games in the world. The Caves and Cliffs update which is set to be the biggest update of Minecraft is scheduled to release in the Summer of this year.

The developers have also made several changes in 21W10A. Cobbled deepslate can be smelted into deepslate and can be placed along any axis, lightning rods can now be waterlogged, and underground fossils generate deepslate diamond ore instead of coal ore. They have also made texture changes to deepslate and other ores. With snapshot 21W10A, the dev team has also made a couple of technical changes and bug fixes.

Note that with the introduction of OpenGL Core 3.2, Minecraft Java will not run on old computers that do not meet the minimum system requirements.