Free Fire’s 4th Anniversary Celebrations : What All We Can Expect The one another really famous game of the battle royale genre, which remains very popular among the Indian gaming community, Free Fire, has a lot of exciting things lined up for itself as it enters the week leading upto its 4th Anniversary Party. Achieving such a milestone of a game going strong four years after its release, with the huge fanbase that the game has garnered all over these years ever since its inception in 2017 is nothing short of a miracle.

We shall be taking a look at the number of exciting events taking place during this exciting week and take note of all the happenings in-game. Free Fire fans, keep reading!

Notably, we have noticed three or four events in the game which is bound to attract the attention & pique the interest of the regular Free Fire player. Let us take a look at the events scheduled all throughout this week one by one – 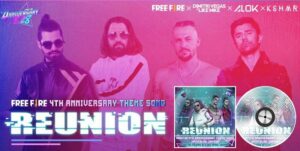 As this is a very special event that is being celebrated by Free Fire, building up the hype is a very necessary part of it. Thus in keeping with the celebrations that are in full-swing this week, Free Fire has released its own music video titled the ‘Reunion‘, which happens to be the theme song for this years 4nniversary Party.

Coincidentally enough, to make things relevant for the players and the game itself, the song has been made by renowned DJs Dimitri Vegas & Like Mike, DJ Alok and KSHMR, all of whom have their own really popular in-game characters.

We want all our Free Fire fans to stay tuned with us and keep an eye out on this space, as we shall be sure to bring you all the latest news, exciting events, and all other stuff lined up in the 4nniversary Party schedule, leading upto the d-day of 28th August. Let us know in the comments below, which event(s) you love the most!