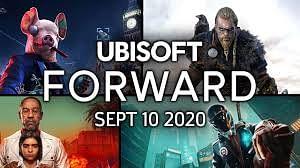 Major announcements were made at the live stream which included the rumoured Prince of Persia: Sands of Time remake and other games like Immortals Fenyx Rising and Watch Dogs: Legion.

The Ubisoft Forward September 2020 saw the gameplays of some of the biggest and most anticipated games of 2020. This included Prince of Persia: Sands of Time remake. The remake boasts the reimagination of a age-old tale with enhanced graphics and modernized controls.

The developers at Ubisoft Pune and Ubisoft Mumbai have gone above and beyond to remake this Ubisoft’s platformer masterpiece. To be released January 21, 2021 on PC, Xbox One and PS4.

The Division 2 is all set to get a new mode exclusively for Warlords of New York owners. The mode challenges players to climb a 100 story building where each floor will test your skill and resolve.

Rainbow Six Siege world cup was announced. Players from 45 countries will compete against each other for glory.

Award-winning British musician Stormzy is the newest member to join the resistance in Watch Dogs: Legion. According to the Ubisoft website, “Stormzy will appear in the mission “Fall On My Enemies,” in which players will have to help him secure a broadcast of his track in Central London.” Aiden Pearce, the protagonist from the first Watch Dogs also makes an appearance. A playable character with a dedicated story arc for player who purchase the Watch Dogs: Legion Season Pass.

Other games which were announced